History of Technology of Music - everything here is designed to pique your curiosity about music, musical instruments and history. So delve, delight, explore and enjoy! This webpage updated 9-11-2021.

History of Technology of Music

"Music expresses that which cannot be said and on which it is impossible to be silent."
Anon

Please note: This website is now being redesigned ... This website was first placed on the Net on 3 November 2003

Ha! Music may well soothe the savage beast, but what can it then do for the soothed beast? And for any of his soothed friends?

The main purpose of this website is to deliver news and views on the history(s) of humanity's use of music to the present... a big ask!

HoTM! The website for music demons by Dan Byrnes and Ed Matzenik. Music is one of the great joys of life - one of the reasons this website originates. But why does this website originate in Australia? It is partly because Australia is a country of recent historical origin, 1788++, meaning, as decades pass by, Australia as a nation of migrants becomes a collection point for the latest technology of all kinds from the Western World.
Therefore, we have become a collection point for the latest in music technology. Related, is our habit of inviting famous world acts to our cities for performances. Voila! Australia is interested in music, new artists, new instruments, and new music technology! HoTM! will be fascinated to trace all such developments.

Topics to be treated on this website in future will include:

* Timelines on innovations in instruments * music technology *  enjoying recorded music *  performance of  live music * the early music recording scene (internationally) * from gramophones to the first radios * film music * technology for film music *  the arrival of tape recording * the arrival of  stereo (and later, surround sound) * to the first computer-generated music, * to  MIDI, then CDs, WAVs, MP3s and other digital formats * today's DVDs and also portable MP3 players like iPod and countless others... * issues in music industries around the world * pages on individual and exotic instruments *

Also to be considered... 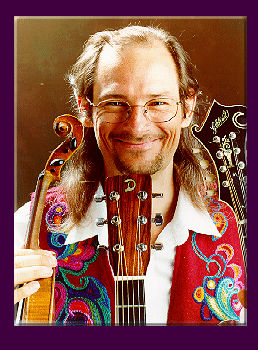 CREDITS: HoTM - History of Technology of Music website is based on an original idea from bass guitarist Ed Matzenik, who once played with the famous Australian surf band, The Atlantics  Ed  (see his picture above) in recent years played bass with best-awarded pub band, Johnny Green's Blues Cowboys, who regularly toured NSW and Queensland, sometimes in Victoria. (Another of their guitarists is a professional fisherman!) This band's line-up included the legendary lead guitarist, Peter ("Flash") Sheedy, originally from the Tamworth area. Ed and Flash till recently still played together in a band, The Instro-Matics.)
Some graphics appear here courtesy of their creators, Dan Byrnes, Joel Byrnes, Lou Farina.
Something is also owed here to conversations over time with Tamworth-based fiddler/guitarist, and Chameleon Musician, Andrew Clermont. (Pictured right, and quite a man!) Andrew is sponsored as he travels by Epoch violins, Gilchrist mandolins, Maton Guitars and White Swallow Banjos.

To Top of Page